Our MP broke his promise to end sewage pollution 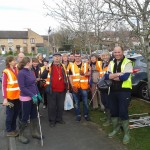 The Stonebridge community litter pick on Saturday 21st March was a great success. Over twenty volunteers took part including a number of younger members of our community. They all worked enthusiastically for an hour making a significant difference to the area.  Most of the rubbish we collected was in the bushes and brambles next to paths, open spaces and in the stream.  We found a lot of drinks bottles, cans and food wrapping waste, as well as an old chair and parts of a hifi.

We also identified some litter hotspots which will be passed onto the  Mendip’s contractors for them to clean-up. One area in particular was the bushes around the edge of the Showfield.

The number of volunteers was more than we’ve ever had, this is probably down to the good weather and advance publicity, but it is clear many people in this area of Frome care about keeping the area in a good condition.  The intent is to repeat this community event again in the Autumn, so if you’re keen to help in the future watch-out for publicity.