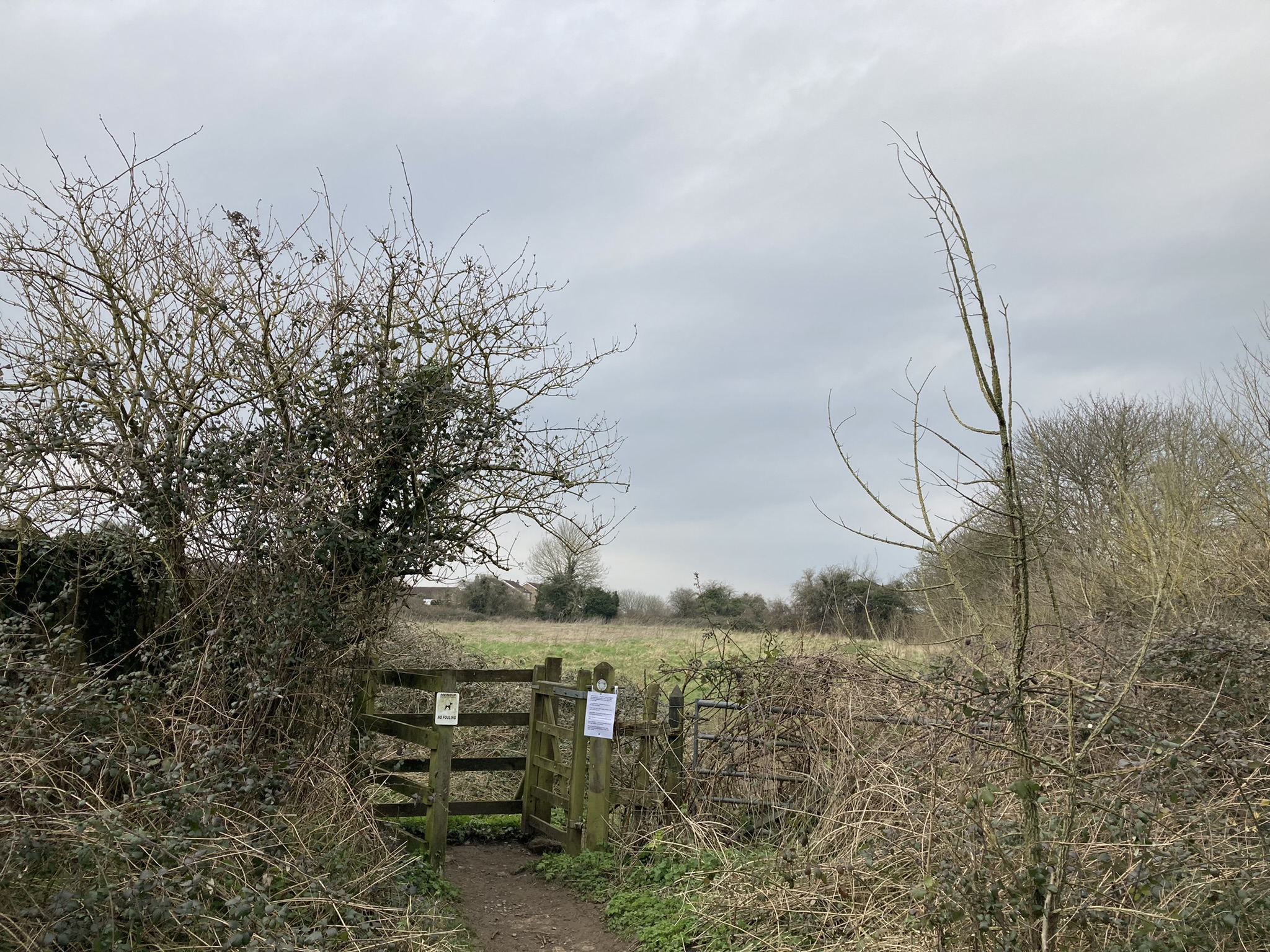 Somerset County Council has decided to dispose of their land between Packsaddle Way and Leys Lane, in a Key Decision on 9th March.

The site is known as the ‘school site’ as it was obtained in 1973 to build a new school. However, the need for a school in this part of Frome has never occurred, and no alternative operational use was identified, so SCC are deciding that the land is now surplus to requirements and can be disposed of to generate a capital receipt to re-invest in other County Council priorities – please see the Decision Report here.

SCC has been negotiating an option agreement with a developer, LiveWest, who would purchase the site if they obtain planning permission to develop the site. Part of the site (not yet defined) is to be retained by the County Council ‘to meet future potential strategic need for social care’. The site is in red below, and please see the update further below.

After a leaflet was posted on the entrance to the fields from Packsaddle Way, I and fellow district councillor Drew Gardner and county councillor Linda Oliver received over 40 emails from residents who live next to the site on Leys Lane and Packsaddle Way, or who enjoy walking (with or without their dogs) there, largely objecting to the County Council selling the land for development and asking for the open fields to be retained. This is a popular route for local residents to walk in a peaceful place, watch wildlife (particular the many birds in hedgerows and trees), walk their dogs off lead (particularly as the fencing of land to the north has restricted access tightly to the footpaths), and access the countryside beyond.

Cllr Linda Oliver replied to everyone, including with the following, “I can assure you that I know how valued this land is to many residents in the area. I therefore understand and respect your views and concerns. However, the land is no longer required for the intended new build school. School numbers forecasts do not support it nor does the location based on housing growth as per the Mendip District Council housing trajectory. On the 9th March the Somerset County Council Cabinet Member will consider the recommendation of officers to dispose of the land known as Packsaddle. What it is not determining is what is built on the land, that is a matter for Mendip District Council if and when planning proposals are submitted. The public report refers to Live West who is a social housing provider with I understand a commercial building business. There is no detail as yet on what Live West are proposing or any indication if they would get planning permission. All that work to bring an application forward is yet to be seen.

“As a County Councillor there is nothing in the report that I could raise issue with. I had checked with the senior officers in School Commissioning in order to confirm why the land was not required for a school.  They provided me with relevant information. The disposal of the land is part of SCC’s commitment to reduce costs and to generate capital receipts for future strategic use. Therefore, there is nothing I can do to prevent SCC disposing of its land.  What I can do and have done is share with the SCC officers, the Cabinet Member, Frome Town Council and the District Councillor, Adam Boyden the e-mails received from residents. However, most correspondence is objecting to any development, this is a matter for the planning authority to consider as and when development proposals are put forward. It is at this stage any objections to development will be considered.

“I would urge everyone to put forward any ideas they have ‘without prejudice’ what they would feel might help towards mitigating the impact of any development. This does not mean you are supporting development but it is not possible to put things forward retrospectively. It could be such things as maintaining and surfacing the ‘permissive footpath, installing a tree belt in areas where other properties are adjacent to the development, installing bat boxes on any trees, maintaining and/or enhancing hedgerows. It does often help to engage with developers and I know that FTC intend to do so at an early stage so they can represent the views of the community.”

Please see here for the report and record of the Key Decision taken on 9th March by the County Council Cabinet Member for Resources, and a site map. The Decision Report here provides background information to the proposed sale. The published Decision Record here states that the County Council’s Cabinet Member for Resources ‘authorises the Lead Director for Economic and Community Infrastructure & Director of Commissioning, in consultation with the County Solicitor, to enter into an option agreement with LiveWest, and subsequently to conclude the disposal of this piece of land in line with this agreement‘.

The meeting where it was made was not a public meeting. However, the decision notice states that comments and representations received from the Opposition Spokesperson, the Chair for Scrutiny Policies and Place, the Local Member (Cllr Linda Oliver), and members of the public were considered by the Cabinet Member before they made the decision. The estimated capital receipt from the sale has been kept confidential ‘in order to ensure that the Council obtains the best market value for this and other future disposals, and also to protect the confidential commercial interests of the buyer’, and is in any case uncertain as it will depend on planning permission being granted for an as yet unknown development.

The County Council’s decision came into force on 17th March. I have now spoken to a senior representative of LiveWest, to put across local residents’ views as expressed in the over 40 emails described above, and to learn something of LiveWest’s initial general intentions.

LiveWest will be shortly appointing a planning consultancy to prepare a planning strategy for a housing development here. They will commission various site surveys and studies this year, including a full season of ecology/wildlife surveys (starting this Spring), and prepare a plan of the site’s constraints and opportunities.

The initial idea is for a market housing-led scheme of up to 80-90 homes with 2-4 bedrooms. As LiveWest have Homes England funding to develop affordable housing by 2025/26, it is likely to propose 40% affordable housing (mainly social rent) (higher than the minimum 30% required in Mendip’s Local Plan policy), with the remaining 60% of houses sold on open market. LiveWest would be long-term custodians of the housing development. SCC are considering retaining part of the site to develop a residential social care facility somewhere on site.

Any plans would hope to retain as much of the vegetation (mature trees and hedgerow/s) and historic features as possible, and some footpath routes. Some trees would need to be removed to allow road access into the site from the south off Packsaddle Way, and some of the permissive path routes would be re-routed. The intention is to develop ‘carbon net zero-ready’ homes to allow easy adaptation to net zero heating technologies.

It is not yet clear when a planning application would be drawn up and submitted, but this could be at least a year away. LiveWest will consult and engage with the local community, Frome Town Council and MDC with a pre-application consultation before submitting a planning application, to gather views on initial ideas. There are currently no proposals yet available to look at. Frome Town Council has also expressed an interest in collecting residents’ responses and concerns.

Update 30th March: In recent meetings with residents in the fields and in the park, and in emails, residents have expressed concerns about the site development, and I have tried to communicate all that I know about the situation. I asked LiveWest when they could start to have conversations with residents about their concerns, and they have agreed to appoint a dedicated communications consultant to engage with residents, which could potentially influence their proposals, as these can be sensitive issues. I’ll update everyone when I know more.

In the meantime, before any consultation, residents can record what is special about the site, including recording wildlife on the Frome community wildlife mapping project (see here). Residents can also form a local group or work through the existing Packsaddle community group.

In any development, I would be looking for the retention of an open space corridor through the site, the conservation of historic hedgerows and mature trees, for impacts on wildlife to be assessed and mitigated, and for the amenity of neighbouring residents to be respected. I would scrutinise any plans as a ward councillor, and then as a current member of Planning Board (and as that is a quasi-judicial role I cannot pre-determine any decision I would be involved in). But I can help residents understand what is going on, and help people have their say and influence what happens. Please do get in touch by leaving a comment here or emailing cllr.boyden@mendip.gov.uk (or cllrboyden@gmail.com). Thanks.