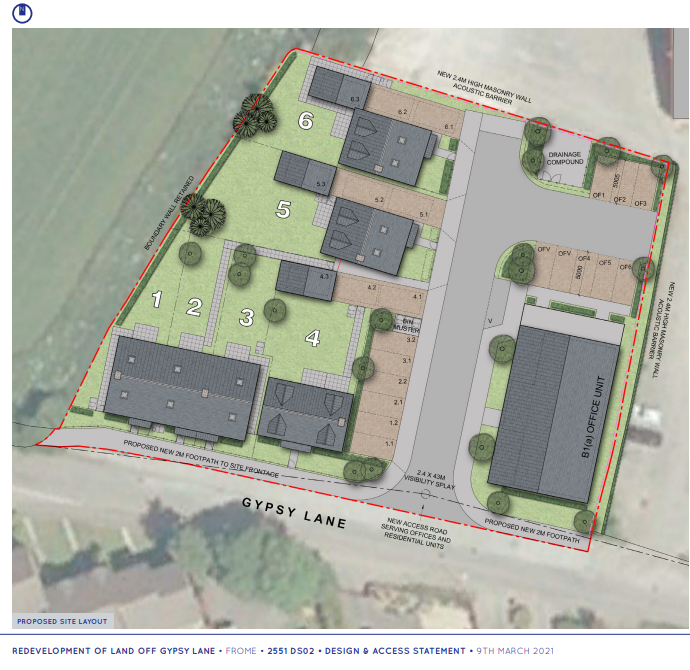 The industrial units and a bungalow along Gypsy Lane opposite Sutton Close are to be demolished, and replaced with six houses and an office block, after a planning application was approved at Mendip’s Planning Board meeting on 16th March.

The application (item DM04 on the agenda, planning ref. 2021/0652/FUL (Bonneyleigh View, Gypsy Lane, Frome, Somerset, BA11 2NA) was an amended version of an application that had been refused previously (by MDC and on appeal). The main issue raised by the site’s ward councillor Cllr Shannon Brooke was the potential for the application to bring new residents too close to potential noise sources at Frome Rugby Club pavilion, dance studio and car park, which could generate complaints and lead to restrictions being imposed on the rugby club, contrary to paragraph 187 of the NPPF (see below).

As a member of Planning Board, I raised the application for debate at the Board meeting to discuss these issues as well as nearby residents’ support. I spoke to several residents from across the road who had written in support of the application, and they pointed out that housing and offices are much preferable to the industrial units as a neighbour, with the night-time noise and disturbance currently being generated by the existing vehicle repair business.

However, just before the meeting, the Rugby Club’s concerns appeared to be addressed in correspondence with the applicants and their noise consultants, including in relation to a proposed planning condition which requires the proposed 2.4m high masonry wall to shield noise. As a result, the application was waived through by the Board in line with amended officer recommendations, without debate at the start of Wednesday’s Planning Board meeting – the decision was ‘delegated to permit subject to the application being advertised as a departure from the Local Plan and no new significant considerations arising before the expiry of the advert’.

This will take a few weeks, but the residents I spoke to are happy with the outcome. I will also be talking to the owners and MDC officers about how the current noise nuisance can be reduced, and the applicant’s timescale for the development.

The site location map and extracts of the applicant’s Design & Access Statement (see here) are found below: