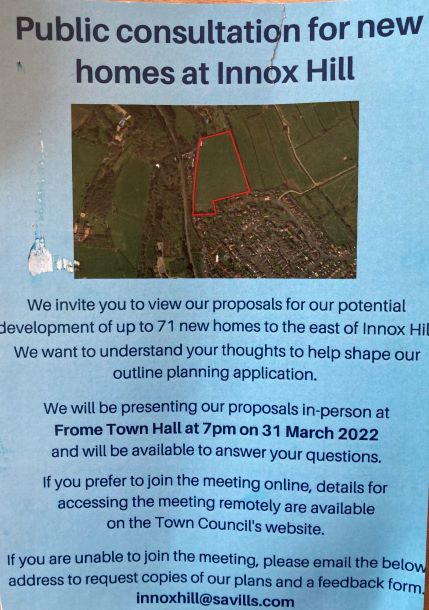 Local residents in the Packsaddle and Innox area have been notified by leaflet that Savills are giving a pre-application presentation of their proposals for a development of 71 new homes at Innox Hill (the ‘corner field’ adjacent to Packsaddle Way) in a meeting at 7pm on Thursday 31st March at Frome Town Hall. The presentation will be part of Frome Town Council’s Planning Committee meeting, which is both in person and online – please see here to register and for the rest of agenda. Savills will be presenting their proposals in person, and will answer questions, and want to understand residents’ thoughts to help shape their outline planning application.

If anyone is unable to join the meeting you can email innoxhill@savills.com to request copies of their plans and a feedback form, which they will send out after the meeting.

In my time as district councillor there have been two previous proposals for this site, in 2013 (for 107 houses, planning application 2013/2608/OTA – see here) and 2018 (application 2018/0256/OTA – see here), and a proposed Local Plan allocation (see here), which were all withdrawn following objections. The 2018 planning application led to a ‘Save Cuckoo Hill’ campaign by residents, see here, and objections to that application are set out here. Objections to these developments have included impacts on landscape character, poor sustainability and connectivity with Frome, highways and access, and an ‘in principle objection’ from Wessex Water due to likely nuisance for new residents from the nearby sewage works (which is a very live issue for the site’s neighbours currently suffering nuisance from flies – see here). .

Savills gave a pre-application presentation of their proposals at Frome Town Council’s Planning Committee on 31st March (see below for the slides). Some 70 residents attended and many more watched online.

We learned that this would again be an outline application, with all matters except access reserved for later determination (although an illustrative masterplan and assessments of the proposals were being produced). Road access would be off Packsaddle Way only, with a new pedestrian access off Innox Hill. 71 homes (reduced from an initial 80) and small planted areas would be spread throughout the site, with a ‘landscape buffer’ of vegetation along the northern boundary, drainage swales along hedgerows and a flood attenuation pond next to Innox Hill. 30% (21 homes) would be defined ‘affordable’ homes in line with MDC Local Plan policy.

The Town Council’s Planning and Development Officer then gave a summary of the planning history of the site and the Town Council’s previous objection to the 2018 planning application, including that it was found by Mendip DC’s Sustainability Appraisal to not be a sustainable site for a major development, being far from facilities, and had a landscape impact on the setting of Frome, being beyond the ridgeline.

The representatives from Savills responded to all the concerns, but many in the room appeared unconvinced.

I said that previous applications had generated a lot of reasons for potential refusal and that I was not sure whether the new application had addressed any of those. I noted Wessex Water’s and MDC Environmental Protection team’s previous objection to the 2018 application due to the potential to bring new residents too close to a recognised potential source of odour and fly nuisance and the high risk of fly complaints (as did FTC’s Planning officer) and asked that the applicants take the fly nuisance suffered by neighbours of the site (which was described by several residents in the room) very seriously as it affects a wide area, hundreds of residents already, as I know from over 120 responses to my survey. The applicant’s rep responded that he did not see that a current problem caused by the operation of a sewage works should be a reason to refuse a development here, as it should be dealt with by Wessex Water, and the council could agree a timescale to allow development. The applicant’s team is well aware of the problem, but when I asked if Wessex Water had been consulted (as a senior manager at Wessex had not), he saw nothing to be gained by consulting them before submission. Another councillor said it would be irresponsible to develop this site near a sewage works when the fly nuisance has not yet been resolved.

I asked whether soil/ground surveys had been undertaken, as residents have talked of difficult ground conditions for building houses at the top of the hill at Packsaddle Way. Answer: no.

I asked if there would be a new footpath created to the south along Innox Hill, as if a pedestrian access is created from the proposed housing, how would people be expected to walk to and from the town centre when part of the road has no pavement, it would be creating a death trap as it is hard to see round the bend. Answer: we will have to wait and see the application when it is submitted.

I asked that if this application is refused, would it be the last (as there has been one every 4-5 years recently)? Answer: this is up to the applicants.

Savills emailed out a copy of their presentation (including an indicative masterplan), a summary of the proposed development, and a feedback form (see below). Residents are asked to respond to the consultation by emailing innoxhill@savills.com or in writing to Innox Hill Consultation, Savills, Embassy House, Queens Avenue, Bristol, BS8 1SB, no later than 7th April 2022. Such a major development would be determined by Planning Board, of which I am a member.