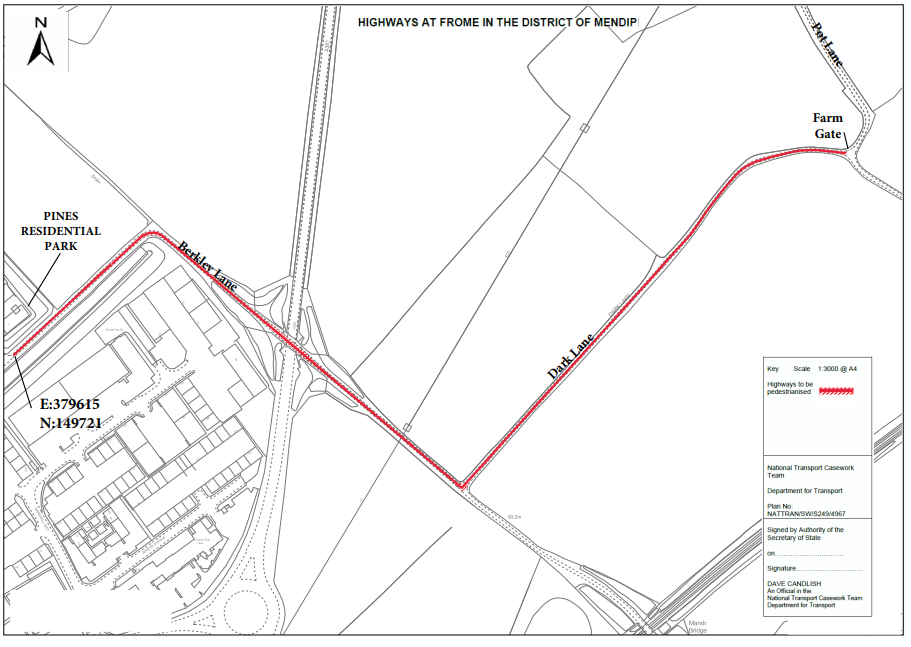 The draft Pedestrianisation Order for Dark Lane and a section of Berkley Lane to the north of Frome has been published for public consultation (see here). This follows the application by Mendip District Council to the Government in December for the Order to be made (see here) to reduce the excessive flytipping there for many years by excluding road vehicles from the lanes.

The Order would authorise the extinguishment of vehicular rights on Dark Lane and a length of Berkley Lane, but contains provisions for permitting the use of those lengths of highway by vehicles being used for police, ambulance or fire brigade purposes; for statutory undertaker purposes; for use by local authorities in pursuance of their statutory duties; for seasonal access for adjacent landowners for maintenance to land and hedgerows; and by pedal cycles, e-bikes, scooters or e-scooters.

The letter, draft Order and map can be found here and are copied below this article. Objections, and also letters of support, can be submitted by midnight on 28 April 2022 to the Secretary of State at nationalcasework@dft.gov.uk or National Transport Casework Team, Tyneside House, Skinnerburn Road, Newcastle upon Tyne NE4 7AR, quoting reference NATTRAN/SW/S249/4967.

Mendip’s application last December followed an extensive initial local public consultation in August/September 2021, to which over 250 people responded, with a clear majority in favour), and a debate and decision at the Mendip’s Full Council meeting in September (see here). Some objections were received from local residents who want to continue to drive through the lanes, but councillors considered the need to reduce the ability of flytippers to ‘dump and run’ here was overwhelming. Somerset County Council has also agreed to support Mendip’s application through a Traffic Regulation Order. MDC’s statement of reasons given in the application is copied below this article.

The proposal for a Pedestrianisation Order under the particular provisions of section 249 of the Town and Country Planning Act 1990, retaining access for walkers, cyclists and horse riders but banning motor vehicles, was actually my initial idea. It was considered, alongside other options, and agreed in detail during months of meetings and discussions from March 2021 onwards between Mendip District, Somerset County and Berkley Parish and Frome Town Councils, the Environment Agency, police and fire service, in a multi agency cross-party working group. The group considered a large number of measures and worked to find an agreeable long term and sustainable solution to the problem of flytipping in this area. The proposal was also discussed and agreed with other local councillors (including Shannon Brooke, Mendip District councillor for Beckington & Selwood ward). This is after the previous road closure under a Public Space Protection Order was not renewed in February 2021 due to a persistent legal challenge, and a local resident launched a petition to keep the lanes closed to traffic for good (signed by 239 people online (see here) and 145 people on paper).

So, please do get involved and respond to the consultation, either way. I hope this proposal is supported by the local community, considering the need to reduce flytipping here, and the lack of feasible alternatives, and I hope it works in making the lanes much more pleasant routes for walking, cycling and horse-riding in future.

Mendip District Council’s Statement of Reasons in the application (December 2021) included the following:

‘Berkley Lane and Dark Lane, in the Parish of Berkley, just outside of Frome, have been associated
with the District’s biggest fly tipping hotspot for many years.   When these roads have been open
to traffic excessive fly-tipping and other unsightly environmental crime (burning waste) has
occurred, resulting in a significant detrimental impact to the environment and the community’s
enjoyment of the area. In 2015/16 it cost Mendip District Council £64,346 in additional clearance
costs above the normal contract, due to the vast quantities and the frequency of fly-tipping
clearances required.

Historically, to resolve these issues both Somerset County Council (SCC), through the
implementation of a Temporary Traffic Regulation Order in 2016 and Mendip District
Council (MDC) through the implementation of Public Space Protection Orders (PSPOs) in 2017 and
2018, have closed these lanes for significant periods of time, 18 months and 39 months
respectively. The road closures created a pleasant amenity for residents to enjoy, specifically by
making walking, riding, and cycling safer, but also reducing fly tipping by between 60% (averaged
over time). It has protected the countryside from unsightly and damaging environmental crime and
resulted in a significant reduction in annual fly-tipping clearance costs.

On occasions, the lanes have had to be temporarily opened and the reintroduction of vehicles not
only saw an increase in fly-tipping but led to feedback from the Parish of Berkley and its residents
concerned with the safety of the lanes due to the speed of travelling vehicles through the single-
track lanes.

In February 2021 Mendip’s Cabinet, following consideration of legal advice, resolved not to
extend the 2018 PSPO or approve the implementation of a further PSPO, due to the risk of legal
challenge, but sought to recommend that the situation be reviewed to establish a long-term and
sustainable solution as a priority.

This resulted in the formation of a multi-agency group (MAG) consisting of representatives from:

Since March 2021 the multi-agency working group (MAG) has met regularly and liaised with local
District and County councillors, to consider and assess a wide range of potential solutions. As a
result, a paper was presented to Mendip District Council in September of 2021 to request support
for the following suite of actions, agreed by all members of the MAG: