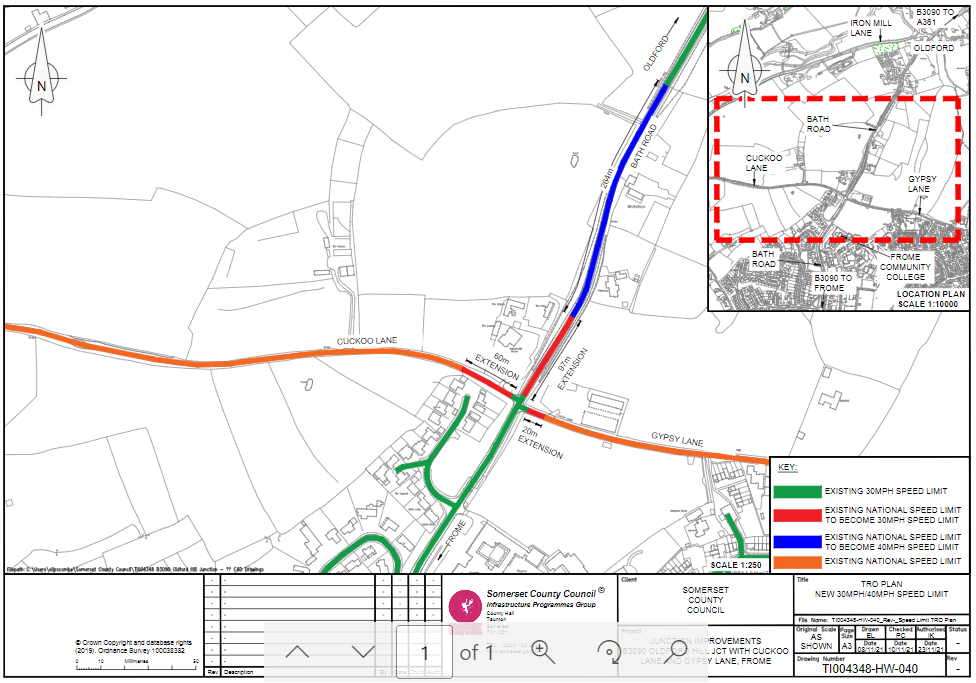 Somerset County Council proposes to make a traffic Order under the Road Traffic Regulation Act 1984 to introduce 30mph speed limit extensions around the Bath Road, Oldford Hill, Cuckoo Lane and Gypsy Lane junction, and a 40mph speed limit to the north towards Oldford, in place of the current 60mph national speed limits there. This was (former) County Councillor Linda Oliver’s Minor Improvement Scheme which she submitted some time ago, which has the aim of improving the safety and visibility at the junction, particularly no doubt for drivers turning out of the Cuckoo Lane or Gypsy Lane who would have more time to move safely across the junction if approaching traffic was slower. This should make the junction safer, and feel safer, to use for everyone.

The previous attempt to reduce speed limits at the junction was cancelled in 2013 after objections to part of the previous draft Order that actually increased the speed limit near Oldford (see here), and it has taken 9 years to get a better one drafted.

The reduction in speed limit also does not extend further east along Gypsy Lane to the junction with Beaconsfield Way, Briar Close, Sutton Close and Frome Rugby Club, even though the planning application for 6 houses and offices is being approved (see here), but that will have to be tackled separately at a later date.

The draft schedule, statement of reasons and map (see below) can be found here. Objections (I hope there are none) can be sent to trafficmanagement@somerset.gov.uk, specifying the grounds on which it is made, or in writing to Somerset County Council, Traffic Management, B2 West, County Hall, Taunton, TA1 4DY, quoting Reference No. KT13012022, no later than 24th March.